the goal of this carrd is to help inform singlets what it means to have DID or OSDD, or as its called, being a system

it can be pretty hard to understand, so we're gonna be breaking each section down based around a question

we hope you can find this helpful

this carrd is created by the aviary system

DID stands for dissociative identity disorder, and it is characterized by the presence of two or more dissociated self states, known as alters, that have the ability to take executive control over the body. There is usually a level of amnesia, or memory loss, between these self-states.

the current supported theory for the cause of DID is as follows: all humans are born as a collection of unintegrated self-states, and as a child ages, these self-states integrate over time to form one individual. however, chronic and repeated childhood trauma, typically up to the age of 9, can disrupt this process, leading these self-states to stay unintegrated, and forming their own identities. this is known as the theory of structural dissociation.

what is a system and what does it do

a system is a collection of alters in one body, which can consist of as little as two alters, up to hundreds of them. many alters exist to deal with specific types of trauma and situations, and a systems main goal is to protect itself.

what is an alter

an alter is a dissociated self-state in a system. alters each have their own perception of self as a unique individual or entity and do not view themselves as only an aspect of a complete person. externally, alters can display different degrees of emotional expressiveness, behave in different ways, and have different skills and abilities related to sensory-motor functioning. they have different thoughts, perceptions, and memories relating to themselves and to the world around them. they may perceive themselves as having an age, gender, sexuality, appearance, source, or even species that may or may not match that of the system's actual body. often, alters have their own wants, needs, desires, and opinions.

what is switching and fronting

switching refers to one alter taking control of the body at the expense of another alter, being given control by another alter, or gaining prominence over another alter. this control is often called "controlling the front" or just simply "fronting".

switches can be consensual, forced, or triggered.

if two alters choose to switch with one another, they usually have some degree of coconsciousness with each other and could both choose to remain at front, or actively aware of the outside world, after the switch.

on the other hand, a switch that is forced is not wanted by one of the alters involved. it may be that the alter that was at front has unexpectedly retreated, requiring another alter to quickly take control of the body in order to prevent injury, embarrassment, or other such problems or that the alter who is switching out is pushing past a weaker alter against their wishes.

triggered switches are not desired by any of the alters involved and occur when stimuli has been registered that forces out an alter who can better handle it.

it should be kept in mind that some systems use the term trigger to refer to both positive and negative stimuli that can catch an alter's attention.

switches can be slow, quick, or uncontrollably rapid. slow switches are usually consensual switches in which two or more alters are co-conscious to varying degrees and slowly blending and retreating to allow one alter to gain prominence. slow switches can also indicate that the system is heavily dissociated and depersonalized and that alters are struggling to connect with the mind and body.

in contrast, quick switches can be consensual, planned, forced, or triggered. triggered switches are especially likely to be quick, but too many triggers or too much overall stress can also lead to rapid cycling.

rapid cycling, sometimes called carousel-switching, is when multiple alters are shoved to front in quick succession. this can involve several alters fronting over the course of an hour or even within a few minutes! it can be highly disorienting for those involved and can interfere with memory formation, concentration, and remaining covert and unobvious.

what is passive influence

passive influence can be described as intrusions from alters that are not currently prominent in the mind or using the body. this may manifest as ego-alien thoughts, feelings, emotions, opinions, preferences, urges, or actions. these intrusions may vary in strength and influence and may result in the fronting alter taking actions or voicing opinions that they can't explain or account for. these intrusions may also cause the fronting alter to gain skills and abilities that they do not usually have (such as public speaking despite normally suffering from social phobia) or losing skills and abilities that they would expect to always be there (such as reading or recognizing loved ones).

memories that are transmitted through passive influence may not remain once the influence is over, leaving the fronting alter unable to recall what the memory contained.

on the other hand, passive influence may also lead to certain memories, emotions, sensations, or views becoming inaccessible to the fronting alter until the influence ends.

what are the different levels of awareness 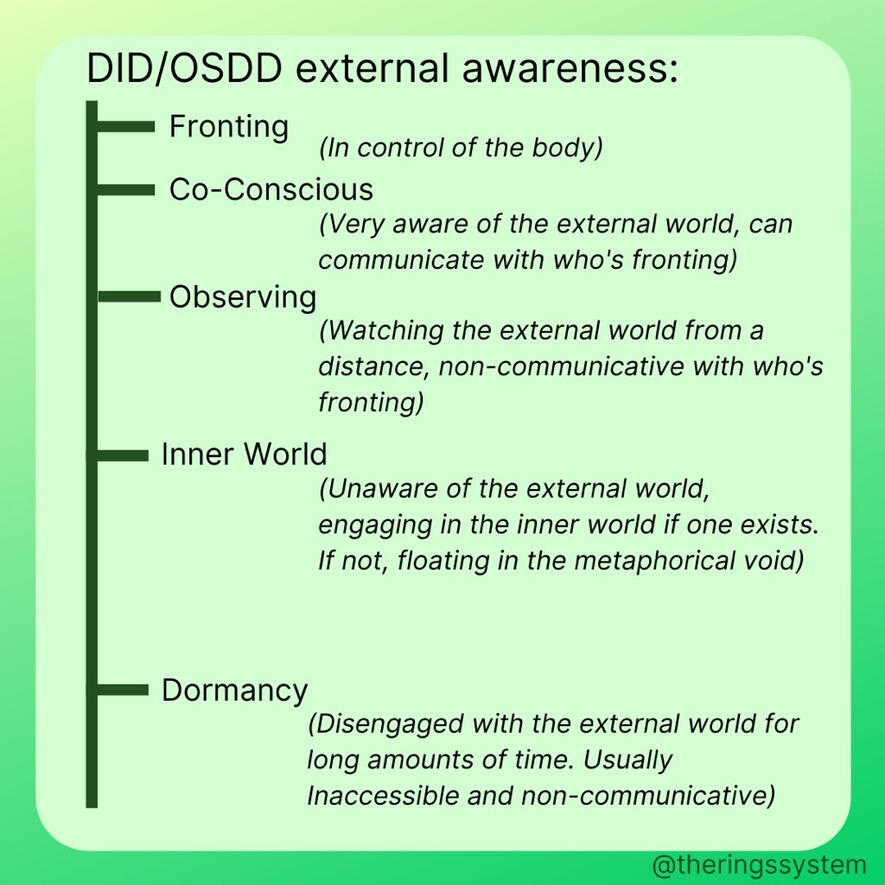 introjects are alters who are based off of an outside person or figure. introjects can be based off a family member or adult caretaker who supported the dissociative child and provided a positive influence on their life, serving as a source of potential positive messages for the child to internalize. introjects can also be based off of historical or fictional figures that the dissociative child found strong, courageous, heroic, or otherwise worthy of being emulated and internalized.

new splits may or may not immediately be well developed. alters that take from one or more source alters as they split may have more substance or be able to quickly gain substance, but many new splits will at first be disoriented, depersonalized, and feel hollow, flat, or not fully formed. alters become more developed and move beyond their original creation as they experience more, interact with more people, and have the chance to react in new ways.

what is the inner wold/headspace

many individuals with dissociative identity disorder have an internal world in which they or their alters can manifest as themselves and interact. these internal worlds, which are also known as inner worlds or headspaces, can range in size and complexity. a system with only a couple of alters might have an internal room in which alters that are internally active, awake, and aware might manifest. others might expand this living room to include doors to bedrooms for groups of or individual alters. some systems might have an entire house that is fully equipped with everything that the alters would feel that they need. some may be even larger than that.

what is DID not

here are some common myths about DID

what should you do and say

what should you avoid